Sagh’ic-Tire Dhream derives from and prizes its own oral cosmology, which speaks of the First Song (creation from the primal maternal spirit) and the Last Song (the ending of the self exiled dream world).

Gleaned from the stories and similarities to other cosmologies, the Egregore (the spirit of the Sagh’ic cosmology) finds and identifies roots in probable Eurasian culture.

Between the forest and last sagas and a myriad of talks and songs which speak of primal spirits and proto beings, and it upon these stories that the Sagh’ic bases all it teaching, direction, divination, rites and ceremonies.

For the Sagh’ic, the world is a living, animated ceremony, enlivened by the Great Song, which was sung by that Primal maternal spirit, Grandmother Ocean and is imbued in every breath, blood, bone of all upon the earth, regardless of species, gender or the human need to suggest animate and inanimate.

The Sagh’ic holds close the lessons of Art-s-Wath (arr shoo way) The Forest and how to live in harmony with all that surrounds it. Sagh’ic-Tire Dhream does not see mankind as above any other thing either manifested or otherworld, animate or ‘inanimate’ (for the Sagh’ic the term ‘inanimate’ is a misnomer). 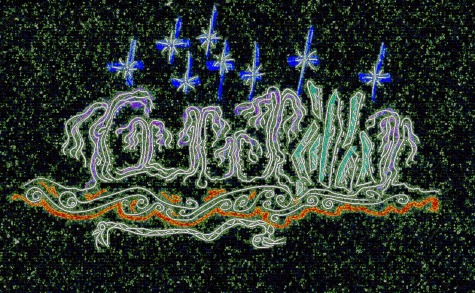 Here is an oral Tradition of saga and song. A retelling the journey of the lost Two Leggeds as they try to find their way back to Art-s-Wath, the Primal Forest.

The Sagh’ic are a re-enlivening of an ancient form of Nomadic Animistic & Ancestral Spirit practice. The lineage and history of the Tradition is lost in the mists of Passing Time, which is brought to re-animation through the Clan Egregore of the Ancestral Spirits, the Songs of the Time Before Time and the First Time. At the same time the words of these songs are related to the pathways that our nomadic ancestors took and the storytellers they met along that journey, in hearing those sagas they wove the words into their own stories; it is a Tradition of dreams not history.

This Tradition is deemed an animistic tradition (Animism; from Latin anima “soul, life”, refers to a set of beliefs that revolve around the existence of non-human “spiritual beings” or similar kinds of embodied principles) observing and learning from the world of nature around in the creatures and elements of the forest how best the community could survive and reach a state of harmony with the Great Forest Art-s-Wath (The Eternal).

At the same time were and are Totemistic; in this way the Sagh’ic differs from the Animistic focus on individual spirits seemingly working autonomously and rather the commonality of ultimate purpose of Spirit manifest in the qualities, energies and guidance of ancestral spirits who provide us with teaching, guidance and reflection of and to life and an ultimate goal or destiny that as humans we may have forgotten. The Sagh’ic are at once, an animistic and totemistic tradition as there is an inherent awareness of everything in creation being united in this spirit imbuing.

Within this Tradition the Ancestral Spirits who make up this ‘primary source’ are all those spirits who took whatever form in the Time Before Time be it animate or inanimate; which cycles us back to all creation being spiritually imbued which returns the belief system to one of Animism through a Totemistic path. Whilst as an animistic/totemistic Tradition, there is an inherent awareness of everything in creation being united in this spirit imbuing.

The Sagh’ic in guidance from the Ancestral Story of the First Return and its telling of that desire of the Ancestral Spirits to share the Great Song, has a tradition of human guides, The Ceann-Iuìl; Pathfinders, who are the temporal spirit guides of the Clan. They undergo intensive instruction and quest, observing the world about them learning from the ways of the creatures of the forest and learnt these ways in order that the community could survive This ‘training’ culminates in a sacrificial initiation of surrender to this service.

Many tribes learnt from specific totem beasts; our Ancestral sojourners learnt from and mimicked the ancient walker of the forest; the wolf.

At it’s heart is the First Song, Mora-oa-Creon, The Great Song that permeates the whole of creation. It is song of the Fear Tintreach, Lightning and Seanamhair Cuan, the Ocean that brought the stars and earth into being through it’s singing, and how through the same song, the stars fell to earth to become the First Ancestors of the Art-s-Wath, Great Forest.

The songs tell of the four Primal Spirits that came to hold the Forest; the world, in place as four great pillars or anchors, each holding and turning the Wheel of Seasons:

Bran The Dark Raven of the North Mountain, who holds time still
Damh the Wild Stag who carries the sun in his antlers in the East;
Muc the Mother Sow who carries the moon in her belly over the South oceans;
Art, the maternal Bear who guards the paths between life and death in the Green Valleys of the West. 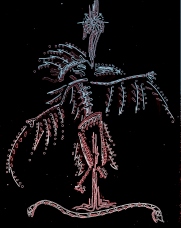 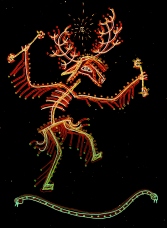 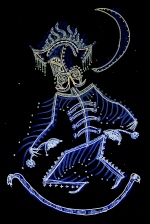 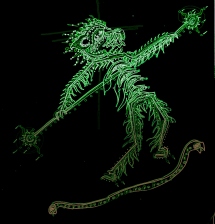 This Nomadic Pathfinder/Warrior Tradition follows the qualities and character of the wild dog beast or wolf and incorporates those into a Spirit and Earth driven way of life and relationship. Within Sagh’ic-Tire Dhream is the belief that from Celi, the First Breath, the Creator/One Above, sent a teacher to humankind, the Two Leggeds to call them home from the darkness of Fear and that this teacher, the First Ceann-Iuil;Pathfinder, was the primal wolf spirit; the Son of The Land. The Two Leggeds refused to listen to the wolf and it was destroyed and vilified. In response to this the Celi, One Above sent the next Ceann-Iuil;Pathfinder who was the wolf in human form and so this continues, the human wolf returns again and again to remind the lost to return home and this compassion will remain until the last breath. 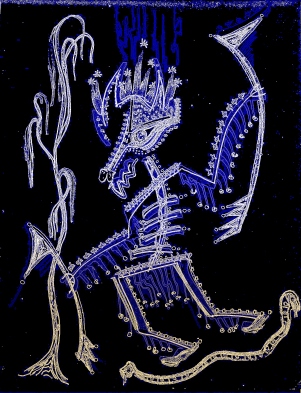 The Sagh’ic works as a inter-reliance ‘nomadic’ tribe, with all members a valuable and integral necessary part of the survival and destiny of that tribe. Within the make-up of the community are also Elemental Guardians who undertake specific duties dictated by the five elements (Fire, Water, Earth, Wind and Dark) to support the community and all engaged in its journey. These would have responsibilities for gathering, purifying, care of the dead & dying, food, storytelling etc.

All kindred of the Tribe are of that Warrior Blood and we welcome as friends and family those who wish to follow our ways either informally or formally as Ùranach, which is a ceremonial process for those who take wish to be inducted formally into the Sagh’ic Clan and to be of one blood with the Community.

This ceremonial induction is one of taking warrior-hood and as such is a testing and proving of the warrior heart and breath. As within the Sagh’ic Warrior-hood is genderless, this induction and its rituals apply to men and women. The 3 Moon Ceremony takes the form of a quest for the wild heart of the warrior and the name of that heart, which is conferred as the tribal name.

Holding both as container and anchor are the Seannair, The Elders known as the Comhairle. This group represents the beating heart of the Tribe and in pairs they hold inward and outward boundaries associated with each of the eight Tribal Lands (directions).

Within the Comhairle are also the two triunes that represent the first primal ancestral spirits; a matriarchal triune of women called the Green Mothers, who hold the spirits of The Ocean, The Earth and The Forest and a patriarchal triune of men called the Dark Fathers, who hold the spirits of the Lightning, The Wild beast and the Guardian of the Dead. 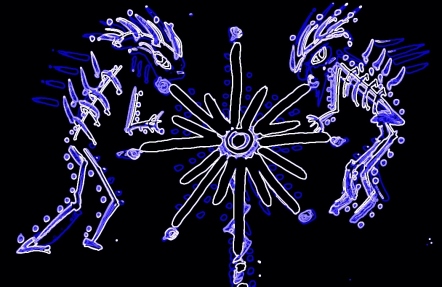 It is said of the Sagh’ic that in the first was the spirit of the female, who calls into being the male, in order to create destiny; ads such the female spirit brings into being and the male spirit takes out of being. In this was the two parts of Tei the One without form or gender knows and gives of itself.

The world of the Sagh’ic and our relationship to it are told in stories, song and dance, which inform, guide, heal and define us.

The Sagh’ic is a tradition that takes its journey (calendar) from the 13 moons lunar cycle and call to Gealach, the maiden Moon birthed to guide and to gather us and she would leads the nomadic journey of life, called the Wheel of Seasons

Sagh’ic-Tire Dhream is not a religion, it is an animist traditional way of living, rife with ceremony, ritual and the sacred sagas, it does not seek publicity, and neither does it seek to recruit or proselytize, yet it holds its hands out in continuous welcome and sharing.