This Wolf has links to Fenris, the Dark Wolf, son of Loki, who was made divine so that he would not complete his destiny, which was to bring an end to the gods (to disparity) and return the world to its primal equality. The First Ceann-Iuìl, The Wolf, is buried deep within the earth beneath Yrgriddia The Great Song Tree and his mess

enger is the Twin Ceann-Iuìl Bran Fithcheak, the Raven, who holds time still and humankind in the safety of his dark wings. For The Sagh’ic the true translation of the name of the wolf is ‘Wild Dog Beast’, suggesting something far more primeval.

The Sagh’ic-Tire Dhream is one foremost of community, clan and family; where all interactions are based upon the interactions within a family or pack.

This Tradition is a way of being in this world and life rather than a religious affiliation.

To live in accordance with this Tradition is a choice and an invitation to any and all.

This Lineage Tradition does not seek to evangelise, rather it is a Forest in which we can walk in unity and harmony with all the children of the Earth.

The Great Forest; Art-S-Wath is all there is in the eye of Celi the Creator.

The Great Forest is both the song and the daughter of Seanamhair Cuan the Primal Ocean.

There is no without it or beyond it.

The Void, Feidah Dubh is the pathless place, without direction or purpose; it is a static dream.

The Ancient stories tell of the Last Ancestor named Fear, the Human one. Fear comes last so that all the other kindred and children of the Forest are ready to be the guides and wisdom holders for the human. Tei the One Above knew that at some point in time Fear and Fear’s descendants would be lost and confused and charged all the Children of the Forest to be ready with that wisdom to guide Fear.

The saga of Fear is that Fear fell from the stars above and forgot the song.

Bo the Cow and Muc the Sow become the human’s mothers and try to integrate the child into the Forest.

Fear, and seems right to say that the word is pronounced far.

There is day in the mists of Time before Time, when Fear doubts himself and judges the Forest and all her children for being separate. Fear feels alone and despairs and in this grief he falls into a deep sleep.

In this sleep he dreams.

In his dream he stands up on two legs, for before the sleep Fear like all walked on four legs, and stands above the Forest and above all his kindred.

Fear dreams another world in the Great Void, Feidah Dubh, The Place of Shadows and creates a fantasy from which he cannot escape, believing he has been abandoned by the Forest.

When the Two Leggeds fell into the great sleep and dreamed their walk away and out of the Great Forest, they became so addicted to the dream that they forgot the paths that led home.

Contrary to Fear’s fears, the Children of the Forest are constant in their singing to call the Two Leggeds from their sleep.

In the same way that the song of the Ocean and the song of the Earth called for reunion, so this song of The Forest creates a being from the melodies.; Bearch (bar-shay), the Green Women of the Trees and she walks into the Shadows to wake Fear.

The stories tell how she fell in love with Fear and fell into his dreams and likewise would not wake.
Finally in great sorrow and love, the Children of the Forest call to Tei and ask that Tei finds one who will venture in the place of shadows and create a safe path for the Two Leggeds to find their way home.

This is the Son of The Land, the Primal Wild Dog Beast Spirit, born of the five elements, neither Star nor Forest yet both, neither Two Legged or Four Legged, but both, neither living or dead but both; he is the Shadow Walker Between. 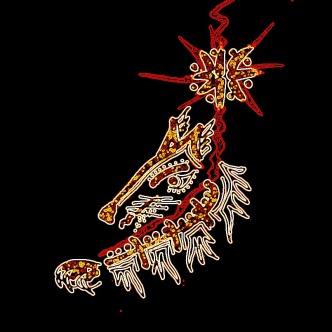 The Stars send Cu, the faithful dog spirit to be a companion to Fear and step by step teach him the way back The Forest. The Old Ones suggest that this is also the Wild Dog Beast in a subdued form.

Yet in these Shadows dwells Dadgra-Dear, The One Eyed; the Shadow Spirit; it was Dadgra-Dear who stood behind the Great Tree and grew jealous of the songs of Bo and Muc to Fear. It is Dadgra-Dear who would rather we stayed dreaming.

The ancestral and lineage role of the Sagh’ic Ceann-Iuìl is to venture between the Forest and the Void and create a path back to the Deep Dark Green of Art-s-Wath, and to lead the Two Leggeds home.

The paths within the Great Forest are the elements of its song; and it alone creates these paths. The Ceann-Iuìl learns to be in tune with the Great Song so that the same pathways are created and manifest within them.

Our Ancestral Ceann-Iuìl were the ones who held the song within. To do this they learnt the song of the world around them; the song of the season, the trees, the animals, the clouds, the weather, the winds, and the people; in this they knew the paths of song that enabled them to lead the tribe around the Wheel of Seasons. Inherently they had the lineage tradition of which path was safe and which was not. Not just walking paths, but paths of the plants (which to use for what reason) and similarly with trees and animals, rocks and waters; they knew the paths between relationships and families, they knew the paths between the spirits, between life and death and birth. Each Pathfinder is in tune with the Forest and the song of every path within them.

Sagh’ic-Tire Dhream is a Great Song of sacred drama and theatre; of heroes and heroines, of battles and loves, of magick and mystery.
And most of all it is a tradition of hope; an action of desire in finding our way back to our primal origins
And the kinship of The Forest.